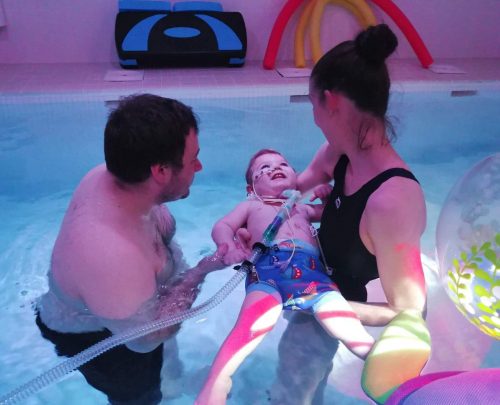 “Claire House helped us to make sure the end of Charlie’s life was peaceful and pleasant.”

The death of a child at any time is every parent’s worst nightmare. But imagine losing your child during the national COVID-19 pandemic.

Andy and Sarah Rooke’s son, Charlie, died at Claire House at the end of February aged 17 months, just as the seriousness of the pandemic was beginning to hit the UK.

“Charlie was diagnosed with Spinal Muscular Atrophy Respiratory Depression, an ultra-rare and despicable disease, in November last year,” explained Andy. “Coming to terms with the fact that our son was in intensive care with a life-threatening condition was…well, it was a high stakes game and we had to make sense of what was going on which is where Claire House became so vital for us.”

It should have been a happy time for the family as Sarah was also pregnant with another son, Thomas, but Charlie’s sudden diagnosis had serious implications for the unborn baby and genetic testing was urgently carried out.

“The outcome wasn’t good as Thomas had the same condition as his brother, and while we were trying to make difficult decisions about Charlie, we were also faced with the death of Thomas who was born asleep,” said Andy.

“I struggle to find the words to describe the support we received from Lesley and Laura from Claire House at that time. As we were losing Thomas, I was also attending meetings about end of life care for Charlie who had appeared to stabilise and I wanted to fight for my son; we wanted to have more time with him, just a few more weeks, and Claire House helped us to make that happen.”

The family began to write their ‘bucket list’ for Charlie, simple things which would create special and happy memories for them to look back on. “It started with a trip to Costa Coffee, but the list grew longer and longer the more we realised what was possible thanks to Claire House,” said Andy.

“We took Charlie swimming in their hydrotherapy pool where he was slapping around in the water, he experienced ‘the beach’ when they brought sand into intensive care for him to touch for the first time, we had endless photos taken and made keepsakes with Charlie’s hand and footprints.”

“Leaving hospital for the first time in 10 months to have a little party for Charlie at Claire House Liverpool was an unforgettable experience. Sarah wanted Charlie to feel the wind on his face, in fact it was also drizzling as we walked to the car so he felt the rain on his skin for the first time too which was special to us,” said Andy. “Simple things became so important.”

Towards the end of February, knowing that time with Charlie was very short and the world was changing at a pace, Lesley and Laura pulled out all the stops to create the final, perfect day for the family. The Rookes moved into Claire House and the team arranged a visit to the Blue Planet aquarium in Ellesmere Port, the one trip on the bucket list they hadn’t yet ticked off.

“That morning we woke up, the three of us, after spending our first night in 10 months together in the same bed. The staff at Claire House left us alone but we felt safe in the knowledge that they were on hand if we needed them, however we knew the clock was ticking,” said Andy.

“We were driven to the Blue Planet, the nurses stayed with us in case anything happened and it was such an enjoyable day that we didn’t want it to end so we asked Laura to take us through the drive through at McDonald’s on the way back so we could stretch the time out just that little bit longer.”

Charlie passed away later that day in his parents’ arms and the family stayed at the hospice for another week to be supported by the nursing team and bereavement counsellors, who were able to help with funeral arrangements which were becoming increasingly strict.

“I said from the word go that I would never let my son suffer and Claire House helped us to make sure the end of Charlie’s life was peaceful and pleasant,” Andy continued.

“I’m struggling a lot right now but, even with everything that’s going on, Claire House is still helping us. Without places like this, our situation would be close to impossible. It needs to carry on, it’s so important.”