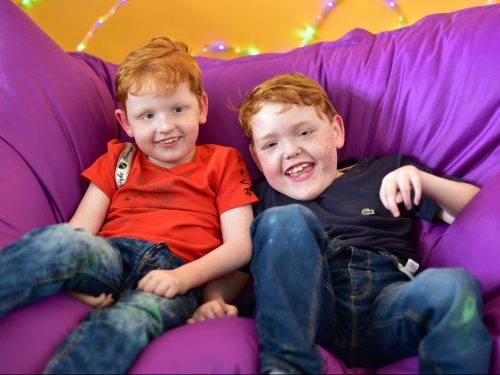 “Caring for our two seriously ill boys became too much.”

Parents, Karina and Jason had always dreamed of a big family but having two seriously ill children pushed them to their limits.

“Our first child Corey was born prematurely at 25 weeks, weighing just 1lb 14ozs, and from the moment he was born he was reliant on oxygen. We were told to expect some sort of brain injury and he was diagnosed as deaf.

“But it wasn’t until Corey was 18-months-old that we were told he had Cerebral Palsy. My husband Jason and I were devastated but having a seriously ill child doesn’t give you much time to dwell on a diagnosis so we muddled through the operations, hospital visits and countless medications.

“Just after Corey’s second birthday our daughter Georgi was born and it was a totally different experience. She reached milestones Corey never reached, like sitting up, crawling and saying her first word.

“Having two children was hard work but Jason and I had always wanted a large family, so we planned for baby number three.

“We were monitored closely and had a perfect pregnancy, but a week before my planned C section I went into labour and my uterus ruptured. The perfect baby boy we planned for was born unresponsive and not breathing.

“Doctors worked to revive him but told us if he was to pull through he would have no quality of life and he wouldn’t be able to move, eat, speak or walk.

“After four months, we were finally able to bring Parker home. His condition meant that, like his older brother, he needed round the clock care, so both Jason and I became full time carers.

“Parker self-injures, doesn’t sleep and, like Corey, is non-verbal and needs assistance to do everything. As Parker wasn’t sleeping we weren’t either, we were absolutely knackered.

“When Claire House was first mentioned, Jason was open to the idea but I never wanted any care because they were my boys and I wanted to look after them.

“When I had Corey, he was quite easy to handle and even though we were in and out of hospital, we got on with it. Then we had Parker and he also required a lot of attention.

“It was hard work, but I was determined we could do it on our own. After three years, however, it became too much.

“One day, Michelle our Community Nurse came round and mentioned Claire House again. We agreed because it was the best thing for the boys.

“Within 10 minutes of Michelle leaving, Claire House were on the phone.

“I remember Jason’s relief but I was still reluctant.

“During our first visit to the hospice we stayed as a family and I remember finding it so hard to switch off and relax. I was so used to doing everything for the boys, it was strange having someone else there to take care of all their medical needs.

“But I needn’t have worried, the nursing staff took care of everything and the boys loved the attention.

“They now love coming to visit. They get to do all of their favourite things like painting, reading books and splashing around in the hydrotherapy pool.

“It’s made me realise you shouldn’t be afraid to ask for help.

“Having Claire House’s support has meant we’ve been able to spend time with Georgi, welcome our fourth child Lottie and get some much-needed rest.

“Now, three years after being introduced to the hospice, we still have the long sleepless nights and countless medications to deal with, but having Claire House by our side makes our lives so much easier.”