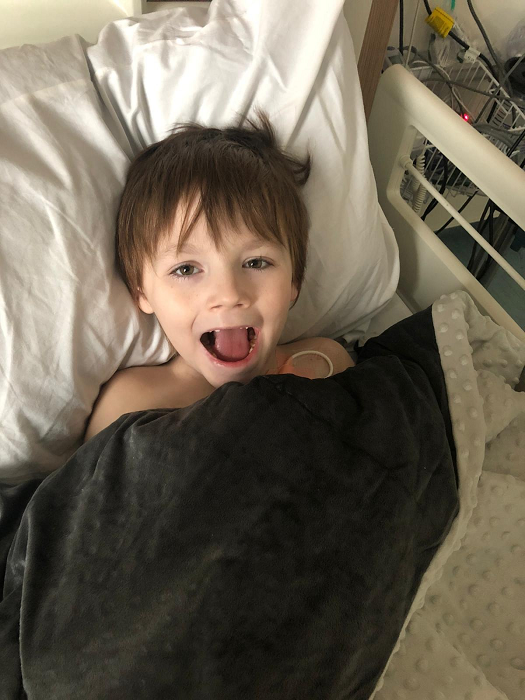 Mum Zoey has lived with her son Liam and daughter Scarlet in hospital for the past year. The support of Claire House has helped the family through an impossibly hard few months.

Lockdown has been really difficult. We’ve been in Alder Hey for a year. I live in Liverpool, I moved close to the hospital to get home more but since then we seem to have just been in hospital. You can see my house from the hospital and yet I rarely get there.

Liam is six years old. He has an undiagnosed condition. He’s got intestinal failure, so he requires tube feeding 24 hours a day. He’s also on the autism spectrum.

He is a cheeky chappy. He loves everything there is about trains. He is very straight; he tells you exactly how it is, but he is really loving as well. He smacks out and shouts and gets quite distressed. He has no filter.

First, he had sepsis and since he recovered from that, he’s had chronic pain. They don’t know why it happens, but it just does.

I’ve not got any family support, so my daughter Scarlet, who is eight, has been staying here at the hospital with Liam and me. It’s been quite difficult as she’s not been having school. They also have a brother but he stays with his grandparents. He can’t come into the hospital at the moment.

Every day is different with Liam, but we basically just sit in the room all day with him. He doesn’t really like to play with his sister, so I have to try to keep them both entertained.

Liam’s got sensory issues and can’t cope with wearing clothes. So, when Katy from Claire House realised he likes to have the feel of something heavy on him and she got him a weighted blanket.

He originally told her to go away but we placed it by his feet and he slowly pulled it up over his legs, then tummy and under his chin and he had a big beaming smile on his face from ear to ear. He hadn’t smiled like that for a while.

Liam doesn’t accept many people into his life but he really has accepted Katy. She’s been an absolute angel; she’s helped him in so many ways and given us ways we can help him as well.

There was a massive train track in and it was definitely a winner. He spent hours building the track. It went under his bed and everywhere.

My daughter, Scarlet, was very young when Liam was born and they’ve spent the majority of their lives in hospital. At Claire House we got to spend time together.

We went into the pool and did a lots painting and drawing. It was nice to be a mum to both of them; rather than a nurse to Liam and constantly telling Scarlet I am busy.

I wouldn’t leave Liam on his own in hospital and I get very few breaks. During our stay at the hospice I got a few full night’s sleep, which is very different to how things are when I sleep on the ward.