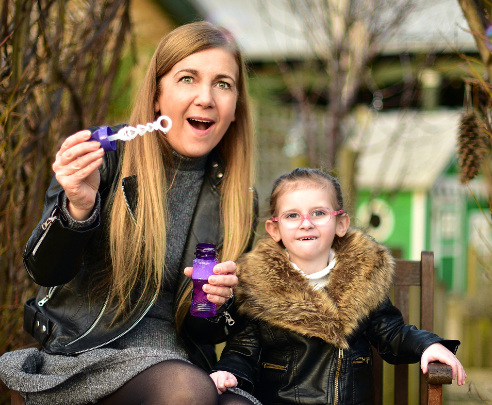 “It didn’t seem right that we would outlive our granddaughter.”

Being a grandparent is one of the most wonderful things in the world, but what happens when your grandchild is seriously ill? Sophia’s Nannie, Pauline, shares how hard it can be.

Sophia is a sunny little girl who loves playing with her dolls, watching Disney films and going on trips to McDonalds – but she also has Cochayne Syndrome, a premature aging condition which causes her pain and affects her growth and mobility.

‘As a baby, Sophia wouldn’t feed and was constantly sick,’ remembers Pauline.

‘At first, doctors thought she’d grow out of it, but after tests, we were given the diagnosis. It felt like the bottom fell out of our world.’

Sophia’s condition has stunted her growth so, at the age of five, she is the size of a two-year-old. Although she can eat tiny amounts, she is mostly fed through a tube in her stomach. She has splints to help her walk, has limited speech, and nerve damage in her hands causes severe pain.

When Sophia was diagnosed, the whole family rallied around to help mum Becca, dad Andy, and Sophia’s brothers Lucas, 7, and Jack, 10.

Pauline and her husband Terry, who are Becca’s parents, helped with childcare, chores and emotional support, but naturally, they had their own emotions to deal with too.

‘We were battling with our own grief and trying to accept Sophia’s diagnosis,’ Pauline says.

‘It didn’t seem right that we would outlive our granddaughter. It was really upsetting to see my daughter, my baby, suffer. I tried to be strong and stay positive but it was tough.’

It’s common for grandparents to grapple with these feelings when their grandchild is ill as Catherine Livesey, who has been a counsellor at Claire House for three years, explains:

‘Grandparents often take on the worries of the child’s parents, as well as their own. They may have questions about how to cope with the diagnosis, and what it means for their family.

‘For many people, the routine of life is that you’ll die before your child does, so when someone’s grandchild is very ill they are often upset that things are happening in ‘the wrong order’.

Catherine says that when it comes to support, grandparents mustn’t be overlooked. They often play a vital role in looking after their grandchildren, so parents can spend time with their other children or have a break from the day-to-day care.

Some grandparents may even help with their grandchild’s medical care, or have their own homes adapted.

Pauline has joined Sophia and the rest of the family for afternoons at Claire House, doing arts and crafts and having tea together. She says it has made a real difference.

‘It’s reassuring to know that the staff can help Sophia with her medical needs and it gives us a sense of normality.

‘Sophia brings us so much joy and we’re so grateful to Claire House for enabling us to create treasured memories with her.’