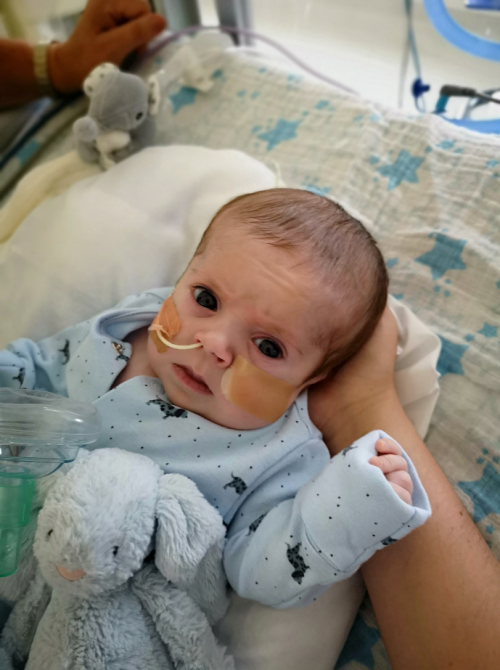 “We had six months with Lennon and they were the best six months of our lives.”

When Chris and Jessica Smout found out their baby boy was seriously ill, Claire House were there for the family every step of the way. Here they share their son Lennon’s story.

“At 28 weeks pregnant, we found out our little boy, Lennon, was going to have life-threatening issues. That is when we met Claire House,” shares mum Jessica.

“We knew through the pregnancy that Lennon had Congenital Diaphragmatic Hernia (CDH) and it was always going to be hard for us,” says dad Chris.

“My pregnancy was so far from anybody else’s ‘normal pregnancy’. We come from a large family and there were six of us pregnant at the same time,” says Jessica.

“But my experience of pregnancy wasn’t the same as any of theirs. I never had anyone to talk to or that kind of support – Claire House did that. They cared for me and supported me throughout my pregnancy.

“With the CDH, we were not sure what it was going to be like when Lennon was born,” says Chris. “He went straight into intensive care. Within two, three hours we had Claire House with us, giving us as much support as we needed.

“We had 24 hours at Liverpool Women’s and then we moved to Alder Hey. Lesley from the hospice came to support us from there on, every day if we wanted it.

“When he was six days old, Lennon had major surgery, which was unbearable for us as parents, but he flew through it, showing how strong he was.

“To have Claire House there, by our sides and to guide us through that was amazing.

“With six months in hospital, there were ups and downs, but Claire House were there to support us, helping us to make memories.

“Lennon was my first child, I didn’t really know what I was doing, what was for the best. And they gave me that confidence,” explains Jessica.

“Come December, when they told us the bad news about Lennon, that he wasn’t going to survive, Claire House were there,” says Chris.

“We decided to go to Claire House,” says Jessica. “For a family who had spent six months in the ICU unit, with all of the bleeps and the buzzers, that was never where we wanted to spend our final moments with our child and Claire House made it possible for us.

“We had a full day at Claire House.

“We had him christened and a service for a second time at the hospice, after he was first christened when he was born. It was beautiful, just how you imagine a little boy’s christening to be.

“After Lennon’s christening, we had a walk out in the hospice’s beautiful gardens, and Lennon experienced, for me, some kind of life.

“I had always wanted to take Lennon outside; he had never been outside. He had only ever been on an ICU unit.

“Without Claire House that would have never materialised,” says Jessica.

“They planned everything and looking back, it is everything, all of our memories. At the saddest of times saying goodbye to your child, it doesn’t get any better than that.

“Lennon left this world, surrounded by people who love him.

“We had six months with Lennon and they were the best six months of our lives,” says Chris. “He was everything for us.

“In the very first weeks, I just needed someone to hold my hand,” shares Jessica. “And that’s exactly what Claire House did.

“And then as the journey went on and time passed, we realised there was more support from Claire House that we could benefit from. They made those initial steps very easy.

“They put us in touch with other parents who have had a similar journey to ours, that we can relate to, that we can talk to and they understand.

“There’s something that suits everybody. I have my own counselling sessions; my husband joins in with the dads’ football.

“Claire House is a sanctuary to me. I am in the place where my child passed, but I am also in the place that loved my child dearly.”